The iMac "Core 2 Duo" (Early 2009) models are quite similar to the "Early 2008" models that they replaced, with similar external cases -- varying only by a "tapered foot" -- and likewise have the same glass cover that "joins precisely to the aluminum enclosure creating a virtually seamless front surface".

Although clockspeeds and configurations are similar as well, there are a few differences -- the Firewire "400" port on the Early 2008 models has been swapped for an additional USB 2.0 port on the Early 2009 models, Mini-DVI has been swapped for Mini DisplayPort, and the 2009 models also have DDR3 memory (rather than DDR2) with twice the official capacity, improved graphics on the higher-end configurations (like this one), and by default, shipped with a smaller keyboard that lacks the numerical keypad. 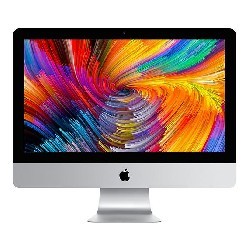